This piece was written as a precursor to the Silicon Valley Robotics panel titled “Women in Robotics: Challenge or Opportunity?” Join us at IDEO’s San Francisco office on Wednesday, April 29 at 7 pm to hear from women in a wide range of robotics roles. Tickets can be purchased here. 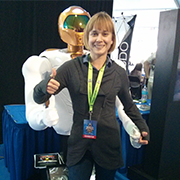 Let me get the basic statistics out of the way. It is widely acknowledged and reported that women are grossly underrepresented in the STEM fields. The U.S. Department of Commerce’s Economics and Statistics Administration (ESA) reported in 2011 that women hold less than 25% of the country’s STEM jobs. Women comprise a mere 17% of Google’s technology workforce; Apple sits at 20%. There are many factors at play, from what the ESA describes as the lack of “family-friendly flexibility in the STEM fields,” to gender discrimination and stereotyping, to the shortage of strong female role models.

It is the latter point that I wish to touch on first, because indeed, I found my niche in robotics due in large part to the outstanding mentor I found in Leila Takayama. I met Leila during an internship at Willow Garage, back when I was struggling to apply a psychology degree to a burgeoning interest in badass robots. I began at Willow as an operations intern. I did everything from inventory management, to lunch clean-up, to multimeter measurements on robot stress tests, to light switch labeling. As much as label making satisfies my deepest desire for order, I saw everyone around me designing and building the PR2. At that time, the PR2 was arguably the world’s most sophisticated personal robot. I wanted in on the action. That’s about as far as I got, though – a keen interest in robots – until Leila joined and introduced me to Human-Robot Interaction.

Without a doubt, it was my experience as Leila’s research assistant, her advice and encouragement, and the challenges she emboldened me to take on, that opened my eyes to how I could make a place for myself in the world of robotics. With Leila as my role model and mentor, I conducted HRI research, co-authored a paper, gradually become comfortable surrounded by a nearly all-male engineering team, and shed the sometimes crippling doubt around whether I had what it took to work in a highly technical field. Witnessing Leila successfully navigate this male-dominated industry cemented in me the confidence I needed to pursue a career in robotics, not only as a woman, but as a designer and researcher.

At Leila’s urging, I applied and was accepted to Carnegie Mellon University’s Human-Computer Interaction masters program. This turned out to be the second most influential factor in getting me to where I am now, co-founder and Lead UX Designer at OSRF. I mention this because, while UX researchers and designers are now in high demand at technology companies, that path would have been unknown to me without Leila’s example.
The message here is twofold: find a mentor within robotics, as I did with Leila; and realize there can be more to a STEM career than only engineering. There is enormous opportunity for women and researchers and designers; there are countless ways for women to kick ass in the robotics field. Don’t misunderstand me: be an engineer if that’s where your passion lies, but know that there’s more to robotics than engineering.

As robots become increasingly commonplace in our everyday lives, the need for robotics designers and researchers (and engineers) is growing, opening up vast opportunities to shape how robots function and behave, and how we in turn perceive and interact with them. Just one simple example: What should happen during a robot-human encounter in a narrow hallway? Numerous social norms govern this scenario on how to negotiate passage when only humans are involved. Bringing such an encounter to a satisfactory and natural conclusion when a robot is involved requires thoroughly technical as well as social and user experience expertise. Who knows, maybe having a female perspective in this research means that robots will never be guilty of manslamming.

For robots to weave seamlessly into daily life, we must design and construct them with a keen understanding of the preference differences not just between genders, but within male and female populations as well. Robots need to appear non-threatening yet capable, be able to accommodate personal space preferences, and provide the desired amount of information with the communication style or tone most effective with its current audience. Robots designed and built exclusively by men, or exclusively by women, will fail in some regards to meet the needs of half their users. If we wish for robotic technologies to flourish, it would be foolhardy to accept the STEM fields’ gender ratio status quo.

Robotics is special among technical areas in that the breadth of required specialties is exceptionally broad. Without an understanding of technical, psychological, cognitive, and social factors robotics will stay locked in limited industrial application areas. Such a limitation would be a enormous opportunity lost.