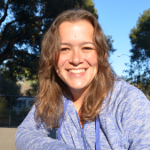 OSRF is pleased to welcome Louise Poubel! Louise grew up in Brazil and thought why not cross the world and go to college in Japan? As if two continents weren’t enough, later she decided to get a master’s in robotics in Europe, where she studied in Poland and France. There, she did research on making humanoid robots imitate human whole body movements in real time. At the end of 2013, Louise joined OSRF as an intern, and has since been collaborating with GUI tools for Gazebo. Now she’s coming to conquer one more continent while joining our team full-time.

She is excited about open source technology and user experience because she believes that machines are here to make life easier for everyone around the world, not the opposite! Along this line of thought, she hopes one day to make robotic Rubik’s cubes which solve themselves while humans just sit back and relax.